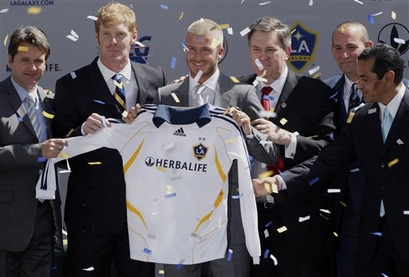 Beckham with new uniform, confetti and folks that will profit from his mean kicks.

The projected popularity of the all-star team is signaled by a logo of bespoke heraldry with a bright quasar the size of the Falkand Islands. International media will have its lens on Beckham on and off the field, as evidenced in the care that was put into their new uniforms (navy at home and white away, with blue accents). Catchy copywriting, inspired by the logo is all too easy now, with many levels of astral-punnery to be had. The finest currently sits on the team site: “The Stars Align.”

Founded in 1995, the name “Galaxy” refers to the parlance of LA celebrity, “stars.” The new Quasar shield supplants the team’s former Cyclone which was more or less an overhead picture of a galaxy.

“We wanted a classic and clean look that would stand the test of time, something that generations of players and fans would wear with pride on and off the field,” said Los Angeles Galaxy President and General Manager Alexi Lalas.
— Press Release

When I space out and stare at this logo, all I see is Dan Friedman’s old Citicorp logo (which is an abstract windmill.) But who cares, designers aren’t going to have this in their telescope, soccer fans will. The almost-NASA worm type may be a serious injury, but they can replace that next season. Implementation will be a cinch for those designers obsessed with pitch-perfect embroidery. An absence of gradients is pleasantly surprising. Depth has been achieved with some careful use of lines and sober color choices — here is a bigger view of the logo in pop-up form. Even though this shield is static in comparison to the former, its brevity is powerful. One can only wonder if the Spice Girls will soon have a new logo and uniforms as well.