The Children’s Miracle Network Hospitals name is an evolution of the previous and better communicates what the organization does. It helps to clarify the mission, while retaining the equity and recognition earned over decades. Known nationally for the paper Miracle Balloon icons sold during fundraising drives, Children’s Miracle Network Hospitals’ iconic emblem was also modernized. Landor’s solution was a simple interpretation of the hot air balloon, keeping the original colors and upward movement, to represent the high hopes for all children that benefit from the organization’s work.
Landor Press Release

Brand video, showing many of the identity applications.

“Every Child” video. Logo animation at the very end.

The previous logo looked like it was done in, well, 1983 but in those more than 25 years it established the red and yellow hot air balloon as a very recognizable icon. The new logo is a lovely evolution and simplification of the original — although I wonder if the striped design of the previous balloon wasn’t part of what made it so distinguishable. It gives the organization a much more sophisticated presence and, as importantly, the logo plays really with other partner logos, which is a great asset for a charity. The logo animation, with the balloon floating upwards, may be a tad obvious but you would have to enjoy ripping wings off butterflies to not get a slight sense of hope after seeing the “Every Child” video above.

If there is an identity that could use a rounded sans serif, it’s this one. The effect has to be a soft, accessible organization and this works. I would have chosen something a little more refined — this one flares a little unflatteringly in some of the characters — but it wasn’t my choice obviously. Overall, a great redesign that modernizes the organization. 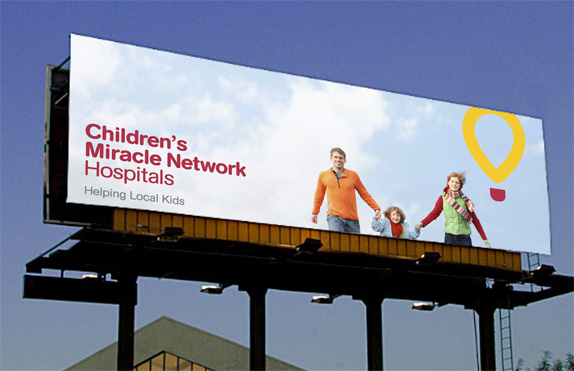 Thanks to Nathan Driskell for first tip.