Nationale Nederlanden, one of the Netherlands’ largest insurance and asset management companies, recently replaced its logo, in use since 1970, with a modified version. The new logo signals a strategic repositioning as a friendlier company, more customer-centric and transparent in its policies than before.

The presentation of the new Nationale-Nederlanden completes the first phase of the integration of the Dutch insurance units into the one organisation. With the customer as the starting point, the company’s points of reference have been updated and its image has been revitalised with a new logo and house style. "This symbolises all the changes Nationale-Nederlanden is currently undergoing", according to CEO Friese. "Our logo is switching from capitals to lower case. We’re highlighting our policy: we’re open, we’re receptive and know that modesty suits us. However large we are." The new logo reflects the individual qualities of the nation as a whole. "We’re emphasising that it’s a shared logo. NN wants to be the insurance company of the Netherlands of today"
— Press Release

The previous mark is well known in the Netherlands. When asked, most can recall the shape of the letter N, the color palette (orange is the Dutch national color), and the tagline “Wat er ook gebeurt” (translation: “Whatever happens”). The tagline is used less today, appearing only in some commercials, a change that signals a departure from messaging about “reliability” and embraces the new customer focus.

Video that sort of explains the texture in the logo. 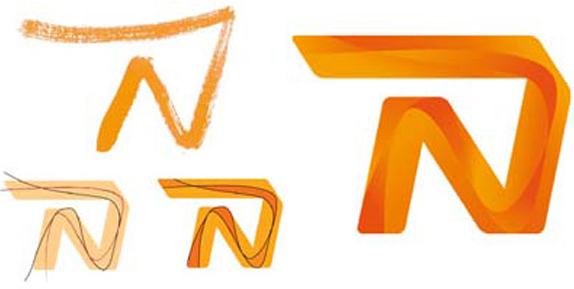 Some samples of the hand-drawn iterations from the video.

The strategy is reflected only subtly in the crafting of the identity, most clearly in the animated form of the logo seen in the tag of the new commercials. Unfortunately, the animated version does not appear often. The static form, which represents the brand on most occasions, consists of a revised, textured N with curved edges. The texture vaguely relates to the animated form of the identity, but otherwise does not add to the meaning of the mark. The name is presented in all lowercase characters.

The rollout of the company’s rebrand is proceeding slowly, and includes the recent launch of its updated website and brochures. I hope to see Nationale Nederlanden feature the visual elements more prominently. Currently, it is a type-driven system, with an orange gradient and a lot white space. The hand-drawn elements do not have much of a role. 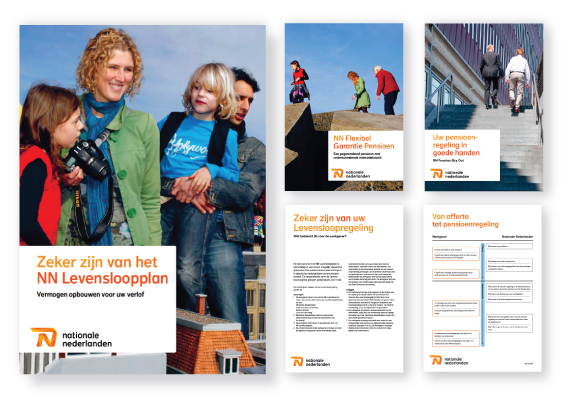 The brochures use a mix of corporate and consumer photography, some better-looking than the rest.

The new identity seems a bit like a bag of tricks: we have seen the modeled texture (city of Melbourne redesign), use of lowercase to communicate approachability (Nextel redesign, among many others), and hand-drawn logos (Design Academy Eindhoven) before. Perhaps this is a case of two preferred logo designs that were merged into one and never sufficiently developed, or perhaps it is just evidence of a company too timid to boldly pursue a breakthrough design.

Thanks to Maarten Heijmerink for the tip.

Nationale Nederlanden, one of the Netherlands' largest insurance and asset management companies, recently replaced its logo, in use since 1970, with a modified version. The new logo signals a strategic repositioning as a friendlier company, more customer-centric and transparent in its policies than before.