While the U.S. Congress and the President go to the mats over child health care, the Shriners Hospitals for Children has steadily been treating children, free of charge, for almost 85 years. With over 850,000�patients cared for and nearly $10 billion spent, the Shriners Hospitals for Children also recently found some time and resources to initiate a much needed re-branding.

Run by the�Ancient Arabic Order of the Nobles of the Mystic Shrine (whose logo is a whole other history-soaked discussion), the�Shriners Hospitals for Children is a non-profit organization with 22 hospitals that focus on pediatric care and research in the areas of�orthopaedic conditions, burn injuries of all degrees, spinal cord injuries and cleft lip and palate.

Developed by Colorado-based�Monigle Associates,�with the support of Shriners Hospitals for Children’s Board of Directors, Board of Trustees and employees, the new brand makes a huge step toward developing an image for the organization that is professional and timeless. In the organization’s words:

The Shriners Hospitals for Children brand�is embodied in its new logo and�a graphic element. The new look�celebrates the 85-year legacy of providing�help and hope to children and their families�with forward-facing, refreshed images,�symbolizing Shriners Hospitals as a progressive, but still warm and caring, organization.

The previous logo was an illustration that replicated the preeminent �photograph of a Shriner — carrying a girl and a pair of crutches, walking away… which meant that the Shriner had his back turned to the viewer. With the relationship of the viewer and the Shriner having obvious negative connotations in the previous logo,�the new logo takes an updated and more positive approach to this same iconic image. We now have the encircled image of a Shriner holding a child, facing the viewer.� 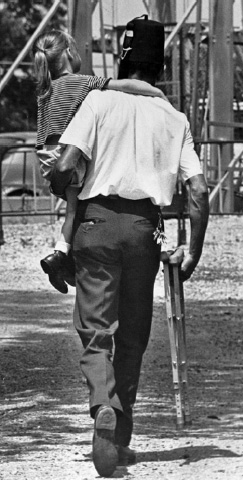 Generally, this is a well done re-branding. While it wasn’t hard to improve over the previous logo, the new mark wisely skips over current trendy styles in branding to deliver a much more timeless and efficient logo. Gone is the four-color illustration, now replaced with a smart two-color scheme that can be easily reproduced in one-color. The red color avoids a generic hue opting to make a strong, own-able reference to the quintessential red fez. The new logo is well balanced, allowing it to sit easily with any alignment. Even the [partial] containing shape — which is so often used to try and create false visual impact — works to give us a sense of positive reinforcement (the individuals being held together by something, a sense of horizon, perhaps a religious halo?).�In addition, the introduction of well restrained san serif wordmark replaces a terribly manipulated typographic mess. While the use of Univers could be seen as a bit cold for the new brand’s intention to remain “warm and caring” it seems an appropriately dignified choice here. 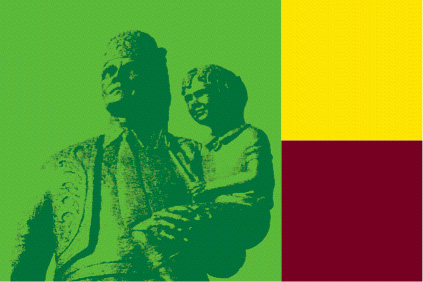 The new brand also makes use of a graphic element (seen above). From the brand launch announcement and the current�Shriners Hospitals for Children website its difficult to get a sense of how this graphic is intended to be used and how flexible it is — time will have to tell.

One notable removal from the logo is the presence of the AAONMS logo including the saber, crescent and star. In the photograph of the original logo, it does not appear on the back of the Shriner’s shirt,�but it was superimposed unto it nonetheless. While there is a lot of mixed symbolism in the�AAONMS logo, it would be interesting to learn about the choice and motivation for removing this visual element.

The only criticism of this new logo is in the illustration itself. While there are certainly echoes of the work of someone like�Malcolm Grear here, the quality of the illustration and its rendering isn’t nearly as well thought out and refined. The scale of the child and proportion is missing the mark, looking like some medieval painting where children were rendered as miniature adults. Assuming that the Shriner is holding the leg of the child above the knee, this child has a serious future as a long jumper or olympic hurdler. The extremely long legs, crooked hand and minute head of the child make the overall image seem a bit awkward and understudied.

As a kid I recall strange older men in miniature cars wearing red fezzes, gleefully zipping around the streets during parades and local festivals. I didn’t understand what they did or what peculiar male bond brought them together for synchronized go-kart escapades. With the introduction of the new�Shriners Hospitals for Children brand sharing a single, consistent voice, chances are it will take the youth of today fewer years to figure it out.

Christian Palino is a�graduate of

\n\nGuest Editorial by Christian Palino\n\nWhile the U.S. Congress and the President go to the mats over child health care, the Shriners Hospitals for Children has steadily been treating children, free of charge, for almost 85 years. With over 850,000�patients cared for and nearly \$10 billion spent, the Shriners Hospitals for Children also recently found some time and resources to initiate a much needed re-branding.