After the population got upset, the university came back with two other options for public voting. Both new options were conservative in contrast with the original proposal but, interestingly enough, didn’t shy away from being different than most higher education logos. Somewhere along the line though — in turns of events unbeknownst to me — neither of these three logos passed muster and the only thing that remained is the only thing that will remain after a meteor hits Earth: Gotham.

The Waterloo font choices are bold, exciting, and modern. They speak to our commitment to innovation while reflecting our unconventional beginnings.

Gotham is a typeface that can survive passing fads in typography. Tight tracking helps create a young, energetic air. From the urban lettering that inspired it, Gotham inherited an honest and straightforward tone that’s neutral without being clinical, and authoritative without being impersonal. Think straightforward and sophisticated — a perfect fit for Waterloo.
— Waterloo Positioning Guide

According to the guidelines, all three justifications are acceptable. The equivalent of a 5:00 am curfew for a wild teenager.

Most have come to know that I am a fan of Gotham and its extensive use, but when it’s deployed with such lack of passion and conviction and in such a lackluster manner, I can’t help but be annoyed by it and what it represents in this specific case: The total dilution of a graphic proposal by a whiny audience that thinks it knows better. How you like ‘em apples now, Waterloo?

While the original laser W had its demerits, most specifically its appropriateness to a university, it at least had, well, balls. To do something different and attempt to create a bold logo. I don’t think it was perfect and I don’t know if it would have succeeded but I would have at the very least remembered it, for the right and wrong reasons alike. The final result though? I will forget about it by the time I eat lunch.

Waterloo’s new design element, lines, represent energy, direction and collaboration through intersection. The line element should be used to reflect the audience: thicker, fun and creative lines for student marketing materials, and thinner, more elegant lines for mature audiences. If you are using the line element it should add an interesting design component rather than detract from the overall look. Give lines a purpose.
— Waterloo Positioning Guide 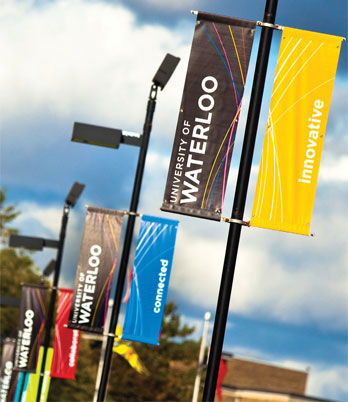 Good try in attempting to salvage something from the original proposal but now it all just feels a little pointless.

Thanks to Nicholas Wu for the tip.