Ablixa: After You See This Logo, You’ll Need It

Entering the market this week is the newly Food-and-Drug-Administration-approved Alipazone — brand name: Ablixa — an antidepressant drug of the “selective serotonin reuptake inhibitor (SSRI) class” that has been produced to treat major depression, and is prescribed off-label for other conditions. The logo, packaging, and advertising have been designed by Pentagram partner Emily Oberman.

When we were asked to redesign the logo for Ablixa we wanted introduce a human element to their identity so people relate to how it made them feel. We then added a sunburst “crown” to illustrate the feeling of security and happiness that surrounds the patient. Having never done a pharmaceutical logo before, we did a lot of research into what makes a successful logo / icon for an anti depressant and found that some representation of the human form and a symbol or sign of improvement or safety was often combined with typography that hinted at strength and a speedy recovery. We wanted to keep it clean and modern and create a figure that would appeal to both men and women. We used the shape of the pill itself to create the sunburst around our newly happy figure. We kept the purple and orange colors so maintain a continuity across the rebrand, but gave each a purpose: purple to represent humanity and gold to represent happiness and safety — like a warm glow.
— Provided text by Pentagram

The old logo had all the trappings of a generic-looking, um, generic drug: Optima, swooshes, and gradients. The new one now at least has all the clicés of generic-looking, brand-name drugs: Italic sans serif, ambiguous human shape, and meaningless bursts of happiness. Whether because this was done by Pentagram and deep down I want to give them some credit or because there is some actual merit to it, the typography is not that bad. The italic Futura bold works well, it is properly letterspaced, and the crossbar of the “A” adds a little edge to it. The human figure is less permissible — even more so when Emily’s own partner, Michael Bierut, has already debunked the benefit of employing “neutered sprites” — and the “crown” looks more like an explosion than any feeling of “security and happiness” that could be communicated. That it uses the shape of the pill is the only conceptual absolution it gets. If there is one successful approach to the crown it is in the TV spot shown above, where it interacts with actual people and the environment. In application there isn’t much of an identity, it’s just the logo repeated over and over; which is fine but I would expect more from Pentagram, specially if they are taking on big pharma projects like this, the least they could do is put a little more effort into it and not just cash, what I’m guessing, is a big check. 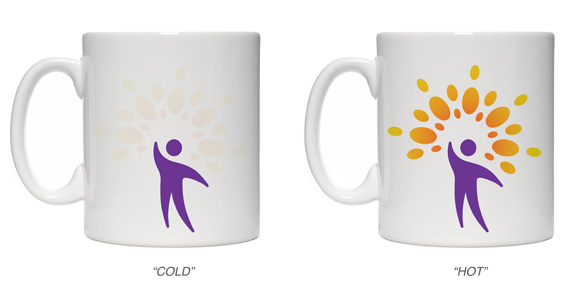 Heat-sensitive mug that shows the “crown” with a hot beverage.

We were hired to create an identity for a fictional anti-depressant for the movie Side Effects, opening this Thursday, directed by Steven Sodebergh and written by Scott Z. Burns. Because of the central role it plays in the film’s plot, “Ablixa” had to look like a convincing pharmaceutical product with a vaguely sinister undertone. Our solution is a compendium of many of the clichés that define this genre. From the happy humanoid figure to the generalized sunburst motif (plus some gratuitous typographic customization) it’s meant to convey that sense of overwrought optimism that we’ve come to expect from multinational corporations that are trying too hard. The identity included a logo “redesign” (the filmmakers had created a placeholder logo that served as our starting point), marketing literature, a website, online ads, and a TV commercial. We take a great deal of satisfaction from reports that most people in the audience seem to believe that this imaginary drug is real.
— Project explanation from Emily Oberman. Congratulations: if you’ve read this far you’ve understood that the project is fictional and that Pentagram has actually answered the brief perfectly. For those of you that don’t read what I write: Suckers! 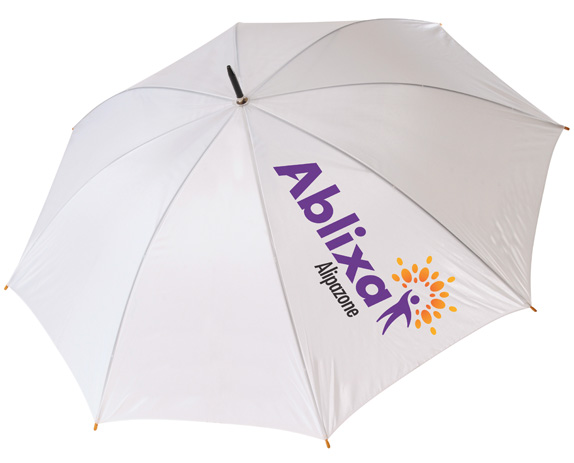 Ablixa: After You See This Logo, You'll Need It

Entering the market this week is the newly Food-and-Drug-Administration-approved Alipazone — brand name: Ablixa — an antidepressant drug of the \"selective serotonin reuptake inhibitor (SSRI) class\" that has been produced to treat major depression, and is prescribed off-label for other conditions. The logo, packaging, and advertising have been designed by Pentagram partner Emily Oberman.