Operating since 1933, Air France has become one of the biggest and most recognized airlines in the world, traveling to nearly 100 countries. A new identity, replacing its last update since 1975, has been designed by Brandimage. A brief video explains a little bit about the change.

Despite still being officially referred to as “Air France” in two words, the logo is set as one word, which is oddly confusing. Its saving grace is that the typography is quite handsome and alone worth the upgrade. Gone are the race car-like, angled stripes that didn’t quite do much for me, and instead there is a new single ribbon-like icon that is simpler and, ideally, more iconic. With enough usage and years under its belt, I’m pretty sure it will become so. Questionable whether the shadow on the ribbon is necessary, but it does add some nice, subtle depth.

When Air France was formed in 1933 from the merger of various airlines, it adopted the logo of Air Orient, a hippocampe ailé (winged sea-horse), which has served as the icon for Air France and its parent company on and off through the years. I’m not entirely sure what role this latest iteration plays in the identity, but it sure is beautifully crafted. This image was floating around a few months ago, but I don’t know how official it is. 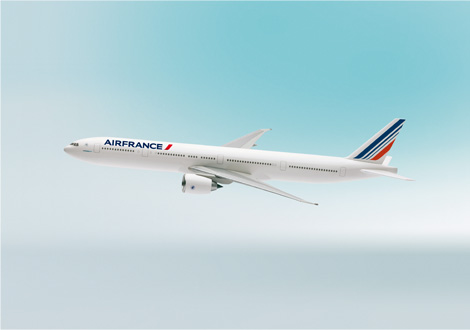 The new livery is nothing to get excited about, it’s pretty simple and harmless. Although the graphic on the tail seems contradictory to the idea of change as it reflects the old stripes. Overall, a nice, elegant update.

Thanks to Austin for first tip back in January and Plamen for reminding me this week.

\n\nOperating since 1933, Air France has become one of the biggest and most recognized airlines in the world, traveling to nearly 100 countries. A new identity, replacing its last update since 1975, has been designed by Brandimage. A brief video explains a little bit about the change.