Around the World in 51 Characters

Just over a year ago we saw a need to update the beloved Wikipedia globe, both to resolve some minor typographic errors found by our volunteers, and to develop a high-resolution version with gradient qualities (it is a sphere, after all) that could be used in a variety of new settings. It was a perfect opportunity to build a new model that would be completely 3D in its design. To complete the project we would need help from a 3D designer, and we’d go back to our community of volunteer contributors to examine what the 52 or so un-identified puzzle pieces might look like.

A new chapter in the history of the logo was written as volunteers examined languages and scripts that were not represented in the previous iteration of the puzzle globe. Several small errors were corrected, and the Klingon character was replaced with an Amharic character (Klingon Wikipedia wound down in 2005). A great history of the puzzle globe, not surprisingly, can be found on Wikipedia.

The actual 3D construction of the new mark was carried out by a San Francisco bay area professional 3D animator, art director, and graphic designer, Philip Metschan. Through his career Philip has worked for Industrial Light and Magic and Pixar, and currently he’s also a visualization and concept artist for the DIRECT program.
— Wikimedia Blog

Despite my subjective apprehension towards the design of Wikipedia, its logo and layout are one of the most ubiquitous destinations online for the whole world and the equity of the globe logo is perhaps as valuable as that of Nike’s or Apple’s so I can certainly appreciate the effort to make it better, more consistent and scalable. The old logo was definitely ridden with visual snafus, including completely distorted letterforms in the globe and fake small caps — by sheer luck I am guessing the italics were saved from being just obliques. The new logo resolves a lot of technical and execution issues and it does result in a more pleasing rendering. The characters in the globe look sharp and well proportioned, the edges of the puzzle are more subtle, the shading is less extreme and there is now real small caps, courtesy of the open source type family, Linux Libertine. It sure isn’t my favorite logo yet, but it has definitely risen from the bottom rung.

A few different angles of the new logo.

The 51 characters represented in the new logo.

If you are interested in contributing to the building of localized versions of the logo, there is a handy guide that explains how to put the logo together. 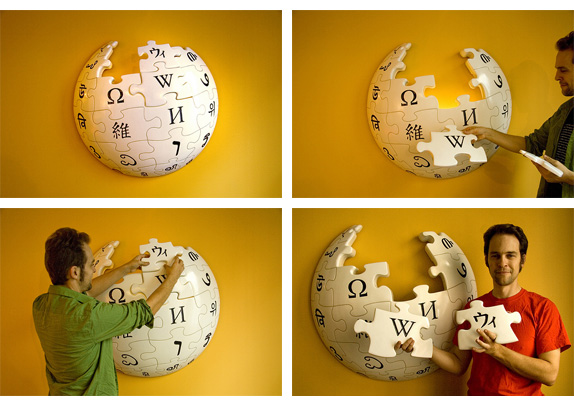 Signage for Wikimedia Foundation by Because We Can.

Thanks to Everett Keyser for first tip.

Around the World in 51 Characters