Attack of the Red Gradients

Established in 1976, EDP (Energias de Portugal) is not just the largest electricity and energy company in Portugal but also a major player globally with presence in Spain, Brazil, and the U.S. with more than 12,000 employees worldwide. It’s also the third largest wind operator in the world. Last week EDP unveiled a new identity designed by Sagmeister Inc.

Both EDP and the new identity and are dynamic rather than a logo, EDP now has seven logos that can be used interchangeably. Through the use of circles, squares, triangles and semicircles, it is possible to combine innumerable different forms that make up the backdrop for the monogram, which remains in all of them. The name is always present and EDP is the common denominator in all the logos of EDP. Now the group is global.
— EDP Brand Page (Google Translated) 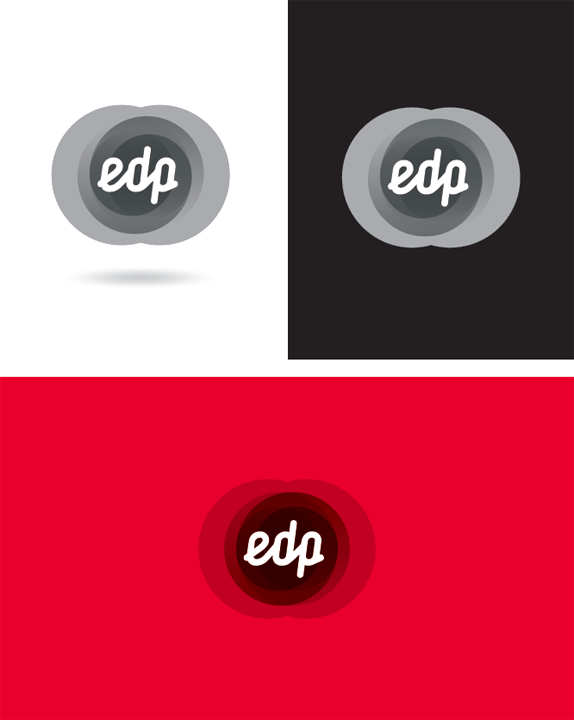 The logo in black and white versions and on red background.

Different logo variations, above. In use, below. 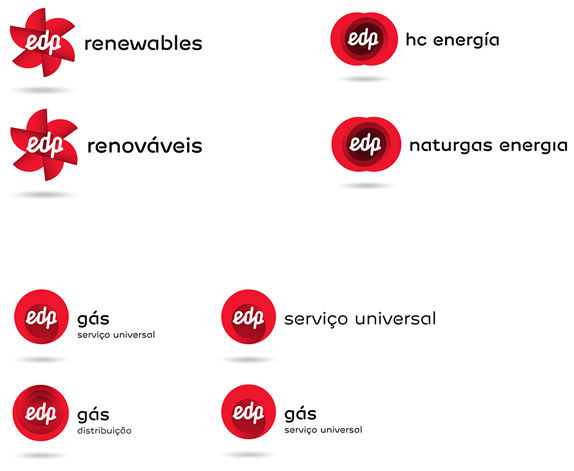 Even though the old logo tried to win you over with a smile it was overly generic fairly lame — plus, the concept wasn’t too original, we’ve seen it on the French Yellow Pages and, as one of our Portuguese readers, Pedro Brito, points out it also conflicted with the much better executed logo of another local corporation, O Feliz. Speaking of the logo by itself first, there is definite improvement, although mostly by contrast. The new logo, or set of logos, are constructed using basic shapes like triangles, squares, and circles, then sprinkled with gradients and overlaid. The resulting shapes and shades are somewhat interesting but, mostly, they are just bizarre and not really very appealing. The script wordmark that happens to be inside these shapes feels as if it came from another identity altogether and has no real relationship to the shapes it lives in. It might as well just have been Gotham. The script itself is nice, but I wonder how much it was originally thought of as being integrated with the shapes and not just two separate concepts that at some point came together. The logo also comes with a soft shadow underneath to make it look like it’s floating and to give it some dimension. An unnecessary gesture. 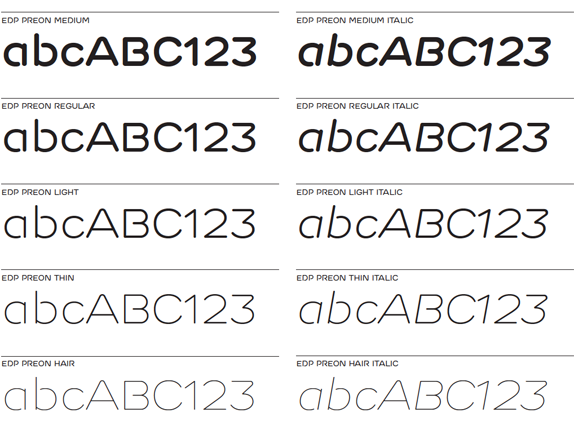 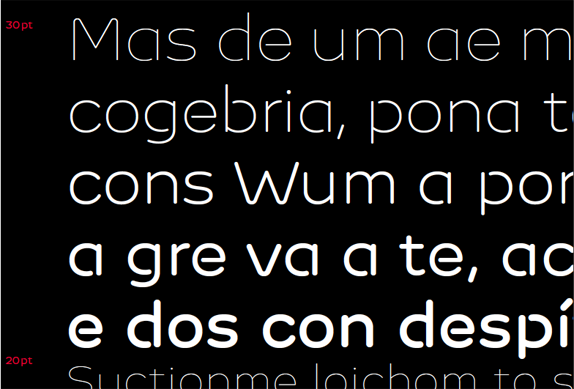 Custom type family, EDP Preon, named after the scientific term for individual particles that come together to form a whole.

Then there is a custom type family. A stencilish sans serif that looks great big but as seen in some pages of the website and the brand manual [PDF] it doesn’t reduce very well. The typeface also holds no relationship with either the script or the shapes. Not that the typeface has to be identical to what’s in the logo, but these aren’t not just in the same ballpark, they are playing different sports.

The world is made of diversity. Icons of various sizes and shapes can help tell a story. That’s what the group wants to convey: there is a universal language that everyone can understand. With the same voice for a universal and effective communication.

Through an iconographic world, EDP talks with customers, employees, stakeholders anywhere in the world. These icons can take the form of abstract ideas, objects, products, information and even animals.
— EDP Brand Page (Google Translated)

Finally, there is a set of icons. Charming. But random. These are at least red and gradient-y, circling back to the logos. Their execution, however, is strangely low grade, like ISOTYPEs filtered through PowerPoint. What’s strange is that I’m sure this was done very intentionally, to not have a super perfect set of icons but rather a kind of wilderness of icons that don’t have to be treated like precious little things. The icons come together like pixels to form bigger images. 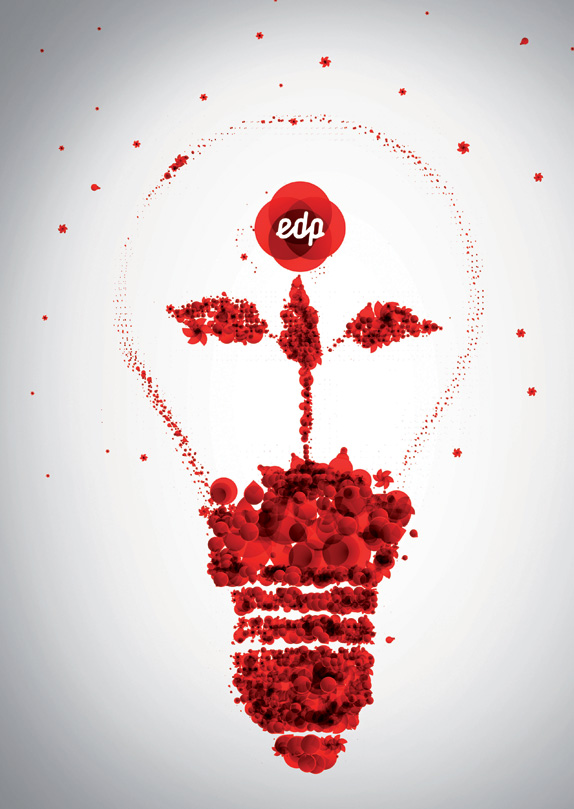 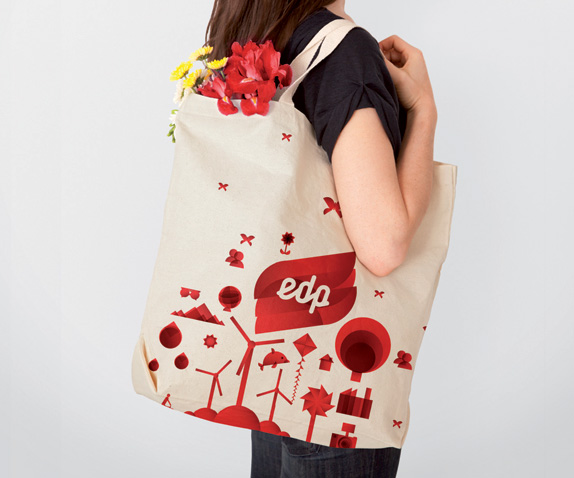 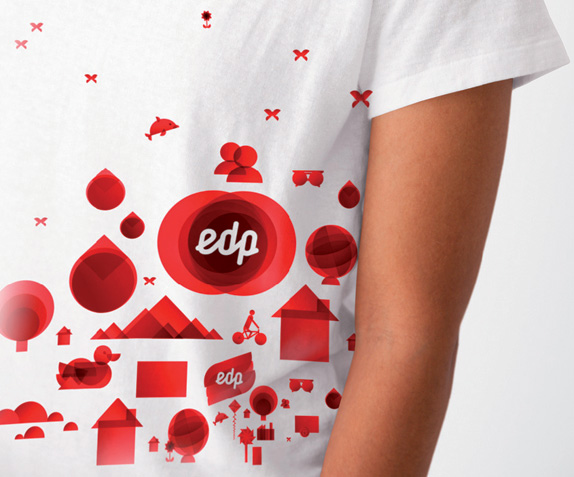 I’m a fan of Sagmeister as much as everybody else but this whole identity is far too disparate. It’s like three or four different concepts thrown in together that never quite found synergy other than in being red and gradient-y.

Thanks to Augusto Borges for first tip.

Attack of the Red Gradients

Established in 1976, EDP (Energias de Portugal) is not just the largest electricity and energy company in Portugal but also a major player globally with presence in Spain, Brazil, and the U.S. with more than 12,000 employees worldwide. It's also the third largest wind operator in the world. Last week EDP unveiled a new identity designed by Sagmeister Inc.