Circle Gets the Square

It’s been fifty years since Chermayeff & Geismar unleashed their modern Chase logo on the stodgy, unsuspecting world of bank branding. They were unique to suggest an institution like Chase use an austere, geometric and non-literal symbol as their mark. To help celebrate this momentous anniversary Chermayeff is launching their newest creation, the redesign of the Bank of Taipei brand—half a century later—with another four-sided trademark, this time with softer shapes and a softer shade of blue.

In their own words:

On the heels of a new international agreement that will allow Taiwan banks to do business in the massive Chinese market, the Bank of Taipei commissioned Chermayeff & Geismar, the firm responsible for designing Chase Bank’s world renowned folded octagon, to create a visual identity that will facilitate its evolution into an Asian banking powerhouse.

The Bank of Taipei came to the firm with many of the same needs Chase had in 1960: the mark had to be iconic and durable so that it will outlast trends in design; leave an imprint on its home city; and weather unforeseeable changes in the banking industry. Having to address business realities that have changed dramatically since Chase came to Chermayeff & Geismar in the ’60s, the firm’s identity also had to portray the bank as high-tech and high-touch; local and international; Eastern and Western.

The new mark is said to take inspiration from the flower at the center of the Taipei flag. The bloom is meant to elicit a feeling of friendliness while the square serves to imply financial security.

The logo system has a well-considered approach to bilingual lockups.

The mark, like the Chase octagon before it, is elegant. The drawing is a study in proportion and the curves are clean and sure to be reliably reproduced. Chermayeff runs a tight ship. They also make good use of the hard lines when crafting bilingual lockups. The system, however—how it’s used across different touch points and to different audiences—seems a little dry. 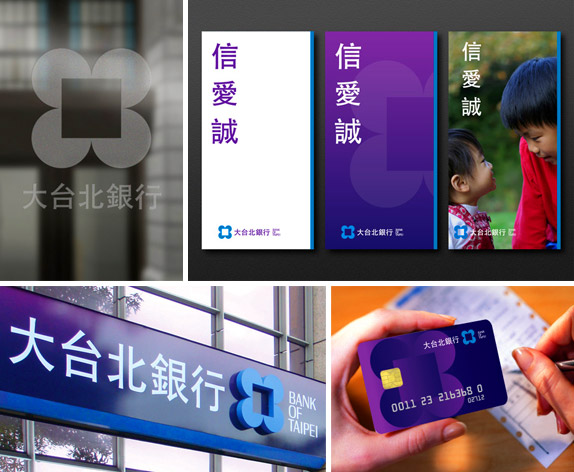 The system extends the purple tones to retail and credit card surfaces.

When it comes to the time horizon of an identity, Chermayeff & Geismar always take the long view (think enduring marks like Mobil, NBC and PBS) and they’re proud of that. They tend to favor purity of form and concept above trend and marketing. Identity design (or as they refer to it, trademark design) is described in a very particular way on their web site:

Trademark design challenges us to use all the magic and intelligence at our command, all our skill, knowledge, vision, and ability, in the creation of a single, clear, direct image that will embody the character and aspirations of the organizations that come to us in search of identity.

You won’t find the word brand here. A word that has come into vogue out of a simple necessity: a company’s identity is now (and has always been) more than a logo. More than a trademark. For Chermayeff, it’s all about the mark. To be sure, this is a strategy suited fairly well to a financial institution in an emerging market. Simplicity can connote strength and establishment.

However, submitting solid, conservative work can sometimes be taking the path of least resistance. All eyes are on China, and for that matter, Taiwan, as the next global powerhouse. A noted leader in pulling other nations out of vicious recession. And yet, when I really look at this identity system, it feels even older than (the semicentennial) Chase and the type (caught somewhere between Optima and Eurostile) does not help.

It’s worth noting that the Chase and Bank of Taipei marks each make for excellent web icons.

Formally speaking, the system is pleasing. The purple used throughout is rich and reassuring and I like how the soft cyan sits so naturally on it. But a mark as simple and unadorned as this one could have used more companions to help express the brand in proprietary and memorable ways. If you look at their web site, you’ll notice the web designers desperately grasping at ways to keep things interesting. It is at least partly the brand’s fault for this disarray of cheesy icons, bursts, glitter and stock imagery that replaces sorely needed brand elements (something as simple as a house display font or the proprietary pattern that Chase has been using recently).

Rotating frames from the Bank of Taipei’s home page slideshow.

It really comes down to the invisible line between design and marketing. The difference between a logo and a brand — something I find myself explaining often to clients, acquaintances, friends and family (and occasionally complete strangers on design blogs).

Circle Gets the Square

It's been fifty years since Chermayeff & Geismar unleashed their modern Chase logo on the stodgy, unsuspecting world of bank branding. They were unique to suggest an institution like Chase use an austere, geometric and non-literal symbol as their mark. To help celebrate this momentous anniversary Chermayeff is launching their newest creation, the redesign of the Bank of Taipei brand—half a century later—with another four-sided trademark, this time with softer shapes and a softer shade of blue.