With start with sophisticated, minimal projects and work ourselves up to crazy, WTF-is-that? stuff with work from Zürich, Portland, and Mumbai. 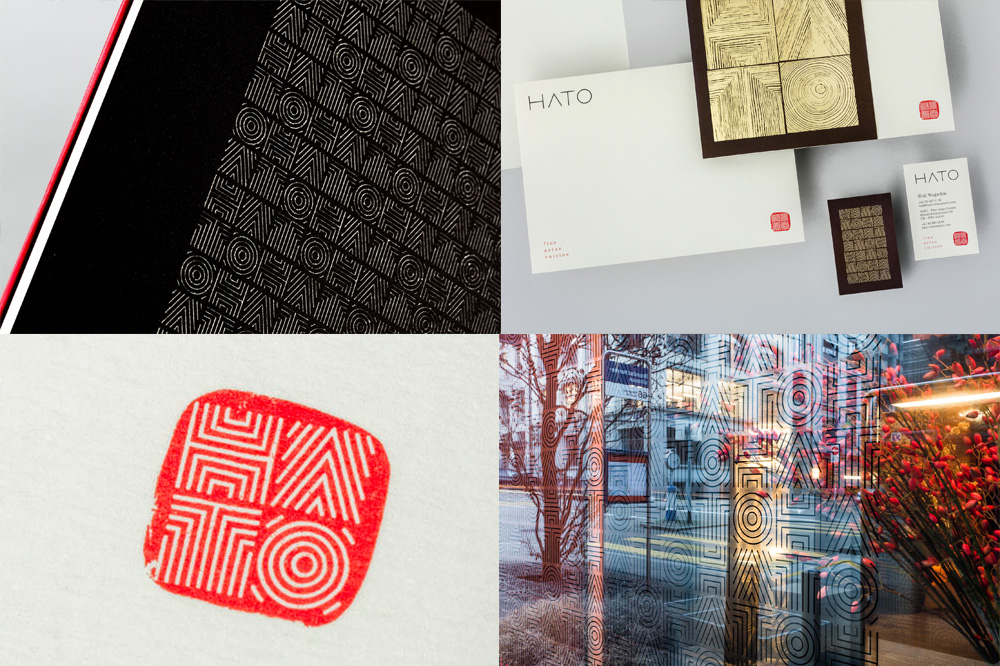 HATO is an upscale Asian restaurant with two locations in Switzerland, one in Zürich and one in nearby St. Moritz. Their identity has been designed by Zürich-based Allink, which starts with a thin-stroked geometric wordmark that is okay but, then, those basic shapes repeat concentrically to fill up their own square area and are rearranged in a square of four squares that has a wonderful, rich texture. That motif is then used like a red wax seal in some applications or as a step and repeat pattern in everything from menu covers to window appliqués to wall partitions. It’s a beautiful mark that anchors the rest of the sophisticated identity (and makes up for that extra-super-duper letterspaced “fine asian cuisine” bit of typography). See full project (Via BP&O) 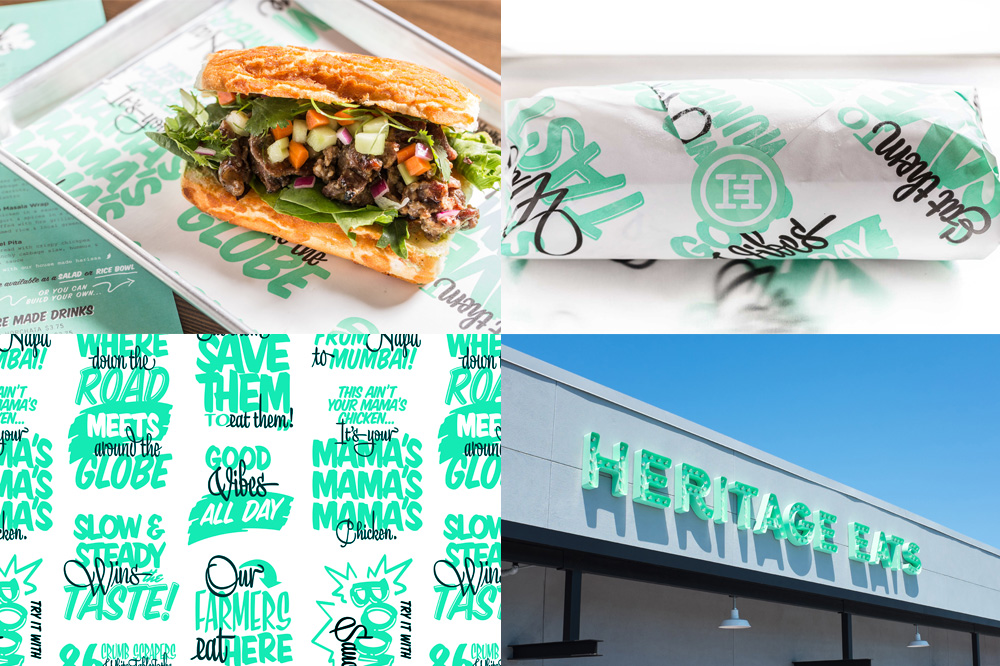 Heritage Eats is a a fast-fine food establishment in Napa, CA, serving sandwiches, wraps, and salads, inspired by street food from various global destinations like India, Mexico, Israel, and Jamaica. Going for a digital-vernacular approach, Portland, OR-based Official Mfg. Co. designed an energetic identity that mimics street brush lettering but unapologetically so with fonts and crisp Illustrator curves instead of doing something that’s halfway. I love how intentional it is in not trying to get the splattery textures of brushes or paint and instead making the best use of various fonts, including Underware’s Liza Pro and House Industries’ free House Slant. The mint color… I’m not so sure about; makes me think of toothpaste but it’s lively. There is also a nice “HE” monogram for the logo, which almost passes unperceived since everything else demands so much attention but nothing that a lovely piece of signage on the facade can’t fix. See full project

Enchanted Valley Carnival is a multi genre electronic music festival held in an airstrip in Aamby Valley City in India that is the first in Asia to include a camp site for revelers. Disclaimer: I don’t expect many of you to like this; I don’t know if even I like it but as an antidote to the sameness and safety of some of the projects lately, it’s worth looking at. Designed by Mumbai, India-based BLOK, the identity revolves around the EVC initials of the event, starting with a logo that merges EVC into a cult-like icon that totally looks like the logo for our alien overlords. Then, doubling down on the EVC approach, they designed additional icons for signage, for the different stages, and for different kinds of people (or something) all just using E, V, C, and a dot. Some of the resulting shapes are awful to look at but the fact that they stuck to it and pulled it off is quite impressive. There is also a cool lateral strand of applications where the E, V, and C are used as a pattern to create cool things like the caps shown. There is also another thing going on with the paper teepee models that’s kind of funky and gratuitous and just adds to the graphical absurdity of it all (and I don’t mean “absurd” in a negative way, more like a Monty Python way). And at the end of the day, you have a stage that looks like the above and even though I don’t care the least bit for electronic music that stage makes me want to come back in another life as someone who would want to go to there (because not right now, no, thank you.) See full project

With start with sophisticated, minimal projects and work ourselves up to crazy, WTF-is-that? stuff with work from Zürich, Portland, and Mumbai.

New Logo and Identity for Vitkus Clinic by Tandemo

New Logo and Identity for Netgen by IDnaGroup

New Logo and Identity for The 19th by Page 33 Studio

New Logo and Identity for Entrepreneurs’ Organization by Brandpie