NutraSweet, one of the first, most visible purveyors of aspartame recently refreshed their brand in an obvious move to take on the pastel world of packet sweeteners. Now NutraSweet, which originated as an ingredient brand (a B-to-B of the food world, if you will) is waging a three-front war with the likes of Sweet n’ Low, Equal and their aftertaste-less companion, Splenda. 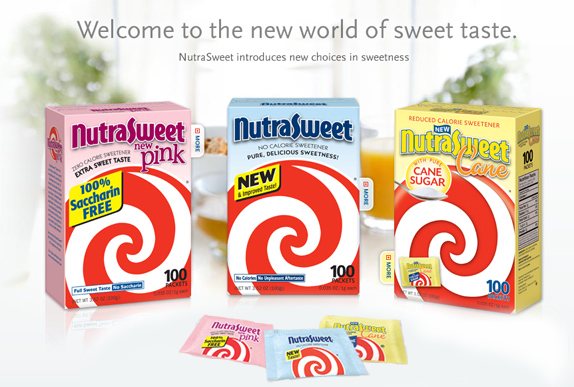 The history according to NutraSweet:

NutraSweet® brand sweetener was discovered in 1965 at G.D. Searle and Company by researcher James Schlatter. He was working on research with amino acids to develop a treatment for ulcers. When he licked his finger to pick up a piece of paper, Schlatter got the world’s first taste of NutraSweet. His amino acid combination may not have cured ulcers, but it helped create a product that revolutionized the category of "sweetener" for individuals and food ingredient companies.

Since its introduction in 1981, millions of people worldwide have enjoyed and continue to enjoy more than 5,000 products containing NutraSweet® brand sweetener. As the world’s premier sugar substitute, NutraSweet offers great taste and virtually no calories.

And from their more recent press release, NutraSweet is Reinventing the Sweetener Category by Cracking the Sweet Codes:

NutraSweet, the best-known sweetener in the world and the company that made “sugar-like sweet taste without the calories” possible, is redefining the sweetener category once again. It’s launching a rainbow of newly improved and distinctly unique products that share the familiar “blue”, “pink” and “yellow” packaging of today’s sweeteners — but are better. This perfected portfolio is designed to give consumers the sweet taste they crave without any compromise.

he other day I found a few of these rogue packets nestled in our office sugar jars. Being the brand nerd that I am, I ran straight to our office manager, Nicole, and asked if she knew where they came from. She thought about it for second and said something to the effect of, "oh yeah, those came with coffee service. I put the pink ones in the pink jar." Seems logical enough. The danger of any product that becomes synonymous with a color is that it can be so easily forged. 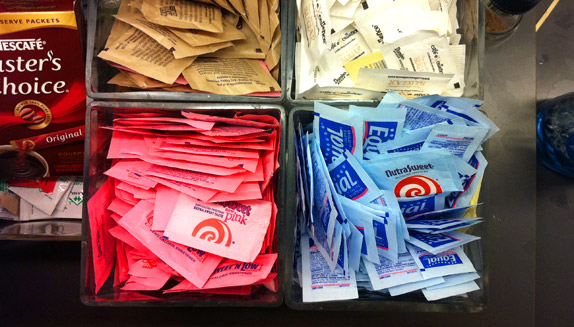 Sweetener Where’s Waldo: I first noticed NutraSweet’s new strategy when a few of their sugar packets made it into the coffee area of our kitchen—precisely what NutraSweet had in mind.

NutraSweet seems to have gone from low-key product to full-blown consumer brand overnight. On their packaging, they embrace all the tricks of the trade: arched lowercase type, gradients, centered axis layout, inlines, shadows, dancing type treatments and catchy product benefit points. It’s all a little over the top. The one thing they did get right was retaining the peppermint swirl. It has been questionably retooled, but at least it’s still there—and larger than ever.

What makes these bizzaro brands strange (ethics aside) is that their colors don’t quite line up to the products they’re mimicking. NutraSweet’s Pink goes after Sweet ‘n Low but proudly proclaims to be "saccharine free." The Splenda-yellow product isn’t derived from sugar per se, but it does contain actual "cane sugar." The Equal-colored blue product, the one that’s actually supposed to have aspartame, proudly states "no aspartame" on its box. It seems NutraSweet is content to pick up customers wherever they can, unconcerned by the fact that more than a few of them are not using the products they think they are — or worse yet, are allergic to, as some people have pointed out.

This strategy might increase revenue in the short term, but this permanent flaunting of category color cues seems destined to create confusion and tarnish the NutraSweet brand in the long term.

NutraSweet, one of the first, most visible purveyors of aspartame recently refreshed their brand in an obvious move to take on the pastel world of packet sweeteners. Now NutraSweet, which originated as an ingredient brand (a B-to-B of the food world, if you will) is waging a three-front war with the likes of Sweet n' Low, Equal and their aftertaste-less companion, Splenda.