Roosevelt University is a university based in Chicago and Schaumburg, Illinois that has grown to offer 126 degree programs since its creation in 1945. The university gave itself a major visual brand overhaul this year as they hired Chicago-based design studio Studio Blue to create a new primary logo system, university seal and sports logo and released them in parallel with the launch of their new website, designed by mStoner.

A distinctive, modern-looking R logo is replacing the University’s current logotype. With its intersecting blend of greens and its unique folds, the new logo speaks to the ideas of diversity and community, important components of what the University stands for. “In the not-too-distant future, people will see the R and know immediately that it’s us,” said Roosevelt University President Chuck Middleton.
— Press Release

In addition to a host of images of the branding applications, Studio Blue was kind enough to share a bit of their process and early work as it lead up to the final solution. Working as a team, with multiple designers contributing to the project’s evolution, they described their project scope to often involve an “immersion and ideation phase, where we conduct site visits and interviews” which often leads them to an “a-ha” moment. In their work with the University, they identified project “goals”, “attributes” and “touchstones” up front as guiding criteria:

Goals
– Strong umbrella font with identifiable personality, exaggerated in logotype use
– Strong mark and seal related to visual voice of logotype
– Components that can work separately or together
– “Roosevelt” should be strongly identifiable on its own
– A system that projects heft — clear, direct, bold

Attributes
– Fast, on the move, going somewhere
– Unique local focus on liberal arts and sciences, research, conservatory
– Knowledgable about contemporary culture
– Rigorous
– Driven by values
– Impactful
– Freedom to stand out
– A place to watch and keep watching
– Contemporary
– Established
– Supportive community
– Gravitas
– Diversity of experiences
– A place to be reckoned with

The folded “R” logomark is as peculiar as it is memorable, or as memorable as it is peculiar depending, on how you look at it — either way, making you look at it twice to try and suss out its formal properties. Strangely, it seems to ask questions about structural integrity through its partial integration of dimension. A quick scan reveals the folded top-left corner of the letter, and then the folded cross-stroke, leading the viewer to the base of the main stroke which is decisively flat. As a visual person, one can’t help but want to figure out what’s happening and try to fix it. This assessment would likely lead to a negative impression, but that is where the mark deviates and remains somewhat fixed in your memory. The application of color and resolution of greyscale and single-color options feels a bit unfinished, but this seems to come from the formal challenges of the shapes themselves (Personally, I’m just pleased to see that these other production requirements were considered, as they seem to be getting lost these days… conversation for another time).

The only considerable letdown in this system comes with the typography and its respective lock-up. The customized Locator typeface is poorly kerned and its scale feels clunky and overwhelming in the presence of the logomark. This seems a strange place to wind up given that the typographic application in the revised seal and Lakers lock-up is more considerate and resolved.

Speaking of the seal, its redesign feels modern and much more timeless than its predecessor. While the torch illustration may have been improved through simplifying the line work, the overall impression feels particularly “established” and “contemporary” — two of the attributes Studio Blue were aiming at in this design system. While seals often feel like 3rd cousins to a university logo, perhaps there was a missed opportunity in bringing their relationship closer? 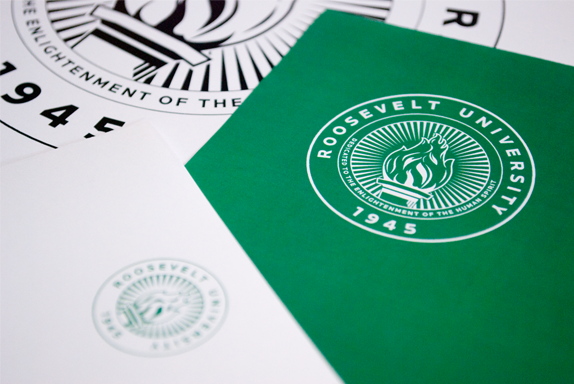 Another piece to this puzzle was the redesign of the Lakers logo. The use of the capital “R”, green color scheme and typography help to keep this close to the more academic design system of the primary logo. The concept for the logomark fits well with the Chicago geography, but the execution, particularly in the outer stroking feels immature.

Overall, it’s challenging to connect the visual branding to “ideas of diversity and community” as extolled by the university president, though this lack of connection between work and brand positioning is not entirely uncommon. The presence of this new identity and equity it may quickly gain through its contrast of visual plays is what the heterogenous nature of an institution like Roosevelt University needs. While it may not be innovative, it is legible, identifiable, contemporary and provides a strong foundation for future exploration.

Roosevelt University is a university based in Chicago and Schaumburg, Illinois that has grown to offer 126 degree programs since its creation in 1945. The university gave itself a major visual brand overhaul this year as they hired Chicago-based design studio Studio Blue to create a new primary logo system, university seal and sports logo and released them in parallel with the launch of their new website, designed by mStoner.

New Logo and Identity for Center for Reproductive Rights by Isometric

New Logo and Identity for CAYCO by Beusual