Ten is the New Twelve

“The new Big Ten logo was developed to symbolize the conference’s future, as well as its rich heritage, strong tradition of competition, academic leadership, and passionate alumni,” said Gericke. “Its contemporary collegiate lettering includes an embedded numeral “10” in the word “BIG,” which allows fans to see “BIG” and “10” in a single word. Memorable and distinctive, the new logo evolved from the previous logo’s use of negative space and is built on the conference’s iconic name, without reference to the number of member institutions.”

The new logo also provides the flexibility of multiple versions which can be used horizontally, vertically and within new media.

“The new Big Ten logo provides a contemporary identifying mark unifying 12 outstanding institutions,” said Delany. “It conveys some elements from the past while simultaneously introducing new features. We think the new logo is fun and has something for everyone.”
— Press Release

It’s not that I’m the most perceptive or clever person in the world but, literally, the instant I saw the logo I read “Big 10”. It wasn’t difficult or complicated. When you are within the context of collegiate sports, the word “Big” is Gestaltingly followed by “Ten.” The connection is immediate. And this logo achieves that by using a “1” instead of an “I” to create the visual bridge. For other people the visual puzzle is not so evident — one of the comments I read somewhere asked “why is there a 1 in the word big?” The solution here is simple, bold and clever. Perhaps not everyone’s cup of tea (or plastic cup of beer) but at least it’s a logo that demands consideration.

Where the identity feels more weak is in the full “Big Ten” version of the logo. Once you have figured out the trick, it’s impossible not to read the above as “Big 10 Ten.” In extended form, it loses some of its spunk and becomes more of a visual wall of impenetrable slab serifs. Not a bad thing in my book, but not entirely pleasing either. 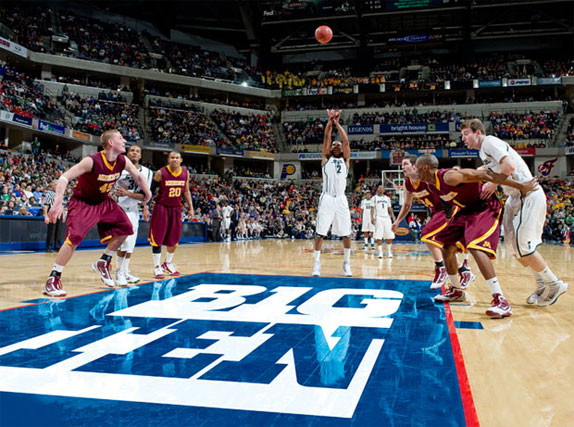 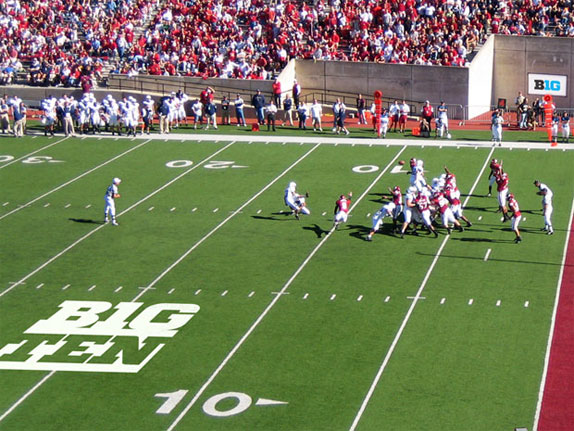 Another big part of the story was the announcement of divisions within the conference that will only apply to football teams. The division names are “Legends” and “Leaders.” The Big Ten bigwigs probably felt like this was the equivalent of a rushing touchdown all the way back from yard 20 but, really, it’s more like a field goal that goes clunk against the pole. I’m not a college football fan so these very proud, gung-ho names are fairly off-putting to me and it sounds like even for people that actually care they are not that amusing either.

The evolution of this identity is very successful because it’s simple and, more importantly, it can recede into the background to let each team’s identity be the main attraction but it still has enough standing power on its own to be recognizable in all those lucratively licensed television broadcasts in the major networks.

Thanks to Michelle Schulp for very first tip.

Ten is the New Twelve