Virgin Blue is (was) an Australian budget airline and yet another in the huge range of Virgin businesses around the world. Following the appointment of John Borghetti as Virgin Blue’s new CEO, Hans Hulsbosch, of the eponymous Hulsbosch Design, was named Creative Director for the airline. Thus began a 12-month transformation process away from budget and towards a “full-service” airline, culminating in new branding and the rename to Virgin Australia.

But before we go any further, I know what you’re thinking” yes, it does look a lot like johnson banks’ work for Virgin Atlantic, doesn’t it? This work was previously reviewed here by Christian Palino for Brand New, and we’ll get to that, I promise, but first let me explain why it looks the way it does. 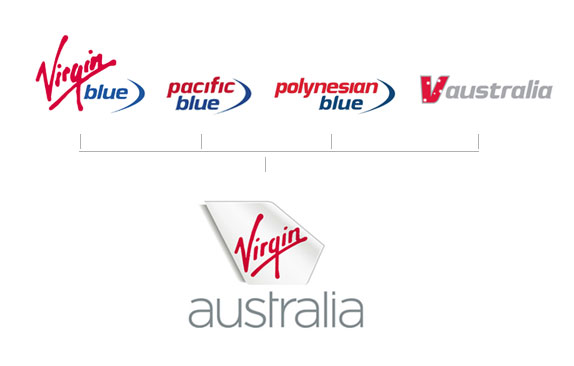 As you can see above, Virgin had gotten itself into rather a bit of a pickle, brand wise, in the Asia Pacific region. I’ll never forget Richard Branson’s rather self-consciously explaining the affixing of “Blue” to the Virgin brand: “The reason behind it is that I was reliably informed that in Australia a redhead is often nicknamed a “Bluey” so we decided to call it Virgin Blue”. Virgin Blue also started naming its sister airlines servicing the pacific islands as Blues. This resulted in Pacific Blue, Polynesian Blue and, of course, V Australia, which wasn’t called Blue at all, and runs a service from Australia’s east coast to the USA’s west coast. If you’re confused after reading all that it’s because you should be, it was, quite simply, a needless mess.

Intended to roll out by the end of the year, the renaming and consolidation of the branding is welcome, and smart. The size of each of these individual markets is rather small (especially when considered against the European or US aviation industry) and servicing each market with such a diffuse portfolio of brands would have been costly, not to mention confusing for the consumer: a visitor to Fiji from NYC had the rather silly and scattered experience of hopping on Virgin America to LA, then V Australia to Sydney, to Virgin Blue for Cairns, and finally a Pacific Blue to the capital, Suva. 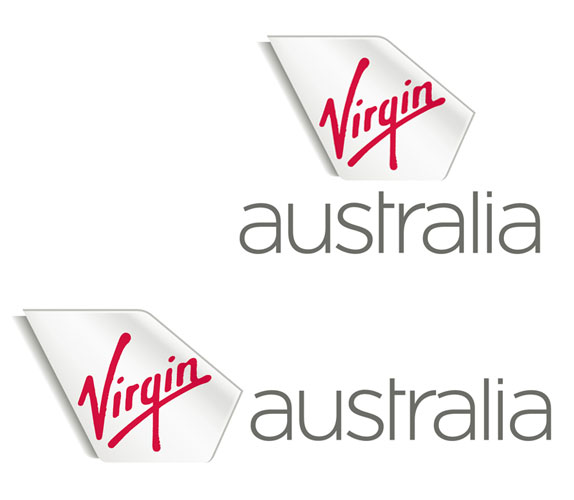 The rename consolidates around the very strong equities associated with Virgin, and I rather like the idea of boarding a Virgin flight anywhere in the world, and receiving broadly the same experience — it potentially gives Virgin’s patchwork of regionally owned/operated airlines an advantage when competing against other airlines that work off of alliance partner arrangements. It’s sometimes rather annoying when you arrive in a foreign land, confused and tired, only to be handed over to an airline you’ve never heard of or flown with, and wouldn’t have chosen if it were up to you anyway. Unifying the Virgin airline experience (and branding) globally makes a lot of sense. 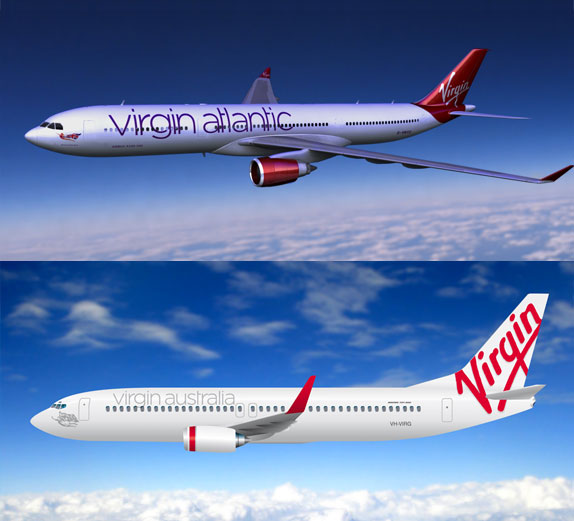 Looking abroad, the team at Hulsbosch and their clients at Virgin Blue no doubt had many airlines, benchmarks and case studies to derive learnings from, define “best practise”, and as we in design call it, “reference”. Undoubtably one airline stood out above the rest, johnson banks’ work for Virgin Atlantic. Comment was sought from both Hulsbosch and the corporate communications team at Virgin Australia, which follows:

The new brand was designed to reposition the airline away from a low cost carrier and reflect a modern, professional and business-like airline that appealed to not only the leisure traveler but the corporate market. While the brand design was developed in Australia it of course was influenced by the Virgin Group heritage and guidelines.
— Hulsbosch spokesperson


Absolutely we feel the branding for Virgin Australia is our own and does not closely resemble the Virgin Atlantic branding, our branding uses the Virgin logo and a ‘Gotham’ font, which is an off-the shelf font, freely available to anyone.
— Virgin Australia spokesperson

I’ll leave it to you, dear reader, to decide what you think, but for me the most important detail when separating the fact from the spin comes from observing the “t” in both Virgin Atlantic and Virgin Australia, which has been customized in exactly the same way, by removing the left hand crossbar. (Not to mention both use the same weight out of the 70,0000 or so weights of Gotham you can get these days). As is only right in these things, I sought comment from Michael Johnson, who rather more bluntly had this to share:

As far as we can tell Hulsbosch Design have just picked apart our vector artwork, I’m trying to get some clarity here to see if Virgin Atlantic “gave” them the artwork or not… I’ve had no reply yet from Hulsbosch.
— Michael Johnson, johnson banks

Arguments over authorship and who made what first where and for who aside, the overall outcome for Virgin Australia is a definite improvement, given the new strategic direction for the airline. Whereas Virgin Blue was a cheeky, irreverent price-fighting, unapologetic budget airline, Virgin Australia is now a more grown-up, full-service alternative, allowing them to chase the lucrative business traveller market. It does irritate me that the Virgin logo on the plane’s tail and the plane tail in the logo are different. The other issue I have seen pop up a number of times is the bottom side of the tail device has no line or shadow to define its edge — meaning often it appears that the horizontal version of the logo has been cropped ever so slightly. But any day another of those weird roundy swirl thingys from the Virgin Blue logo dies a well deserved death is a great day for graphic design. Scram! 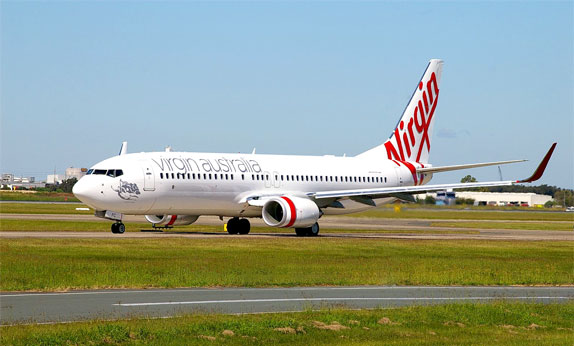 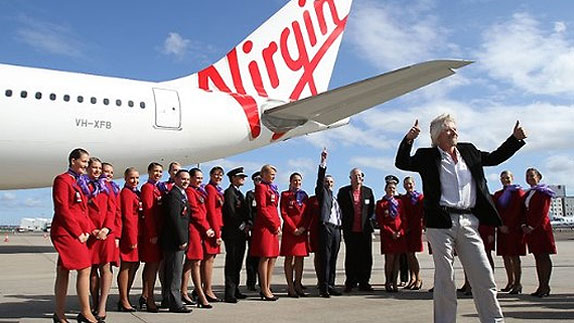 Richard Branson flew in to help relaunch the new brand, John Borghetti, CEO and Hans Hulsbosch, Creative Director, can be seen to the left (red t-shirt is Hans). 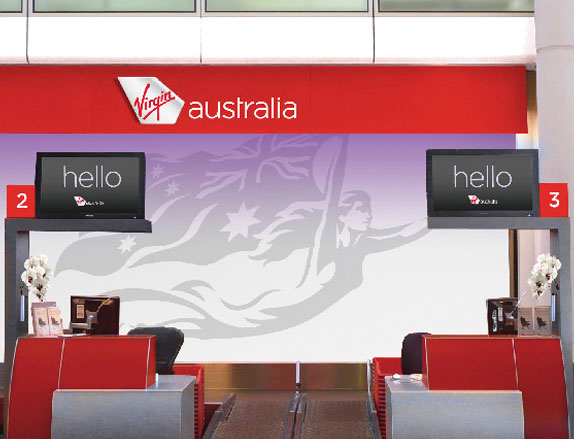 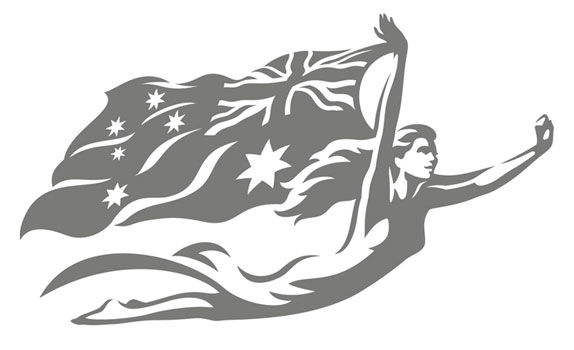 New “Mustang Sally” — apparently every Virgin Airline has one of these.

Comparing whether Virgin Australia or Virgin Atlantic are better is probably a pointless (although understandable) exercise. Both work, one is probably better than the other, and one came first and the other came second. At the end of the day the strength and logic behind this rebrand is the potential being created for Virgin Atlantic/America/Australia to be a cohesive, unified experience across the globe. So it truly does give the possibility that no matter where you go, all over the world, every Virgin is always real Virgin.


New advertising spot promoting the rebrand. If you look close, Hans Hulsbosch gets a special cameo at the 0:15 mark. Nice!

Virgin Blue is (was) an Australian budget airline and yet another in the huge range of Virgin businesses around the world. Following the appointment of John Borghetti as Virgin Blue's new CEO, Hans Hulsbosch, of the eponymous Hulsbosch Design, was named Creative Director for the airline. Thus began a 12-month transformation process away from budget and towards a \"full-service\" airline, culminating in new branding and the rename to Virgin Australia.