SECCA, or the South Eastern Centre Contemporary Art, is a contemporary art centre in North Carolina. Originally founded in 1956, the organization really got going in 1976 thanks to a philanthropic bequest of industrialist James G Hines’s 32-acre estate. In 2010, after an extensive renovation, they turned to Pentagram partner Luke Hayman for a new visual identity to compliment their shiny, newly updated art space. 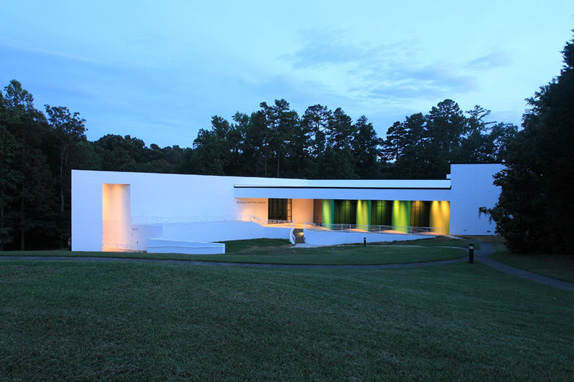 Curiously, for an institution their age and square footage, SECCA are a non-collecting institution, that is, there is no permanent collection from which they curate exhibitions. Once an exhibition of artworks at SECCA finishes, it all goes back where it came from, opening the way for an entirely fresh new exhibition. It’s this aspect of the organization from which Pentagram have taken inspiration for their design solution.

As a non-collecting institution, SECCA places particular value on its space, one always evolving and changing with each visiting exhibition or production. “Flux” became an important key word during design explorations and the final identity conveys a continuing flow; the logo literally moves and fluctuates, echoing the constant change of SECCA’s galleries and community programs.
— Pentagram project page

Just like the institution itself, and the communications landscape a designer is faced with these days, the solution is a logo that is constantly moving, literally in a state of flux. This approach is one that is increasingly appropriate in a real-time world — these days we interact with brands online, digital screens are replacing printed advertising, and the need for identities to be conceived and built with motion in mind is rapidly moving up the list of everyone’s priorities.

This consideration has manifested itself in a number of recent trends, the resurgence of easily animated, simplified geometric forms (for instance MAD, Docomo), container brands (London 2012, NYC, and its southern imitator, City of Melbourne) and data brands (such as Namics). Unfortunately, we also have started seeing logos that look rubbish unless animated (Brand Sydney). SECCA manages to avoid descending into any of that sort of farce, maintaining a suitably dignified repose for an arts organization by using a deceptively simple animation style to bring it to life. 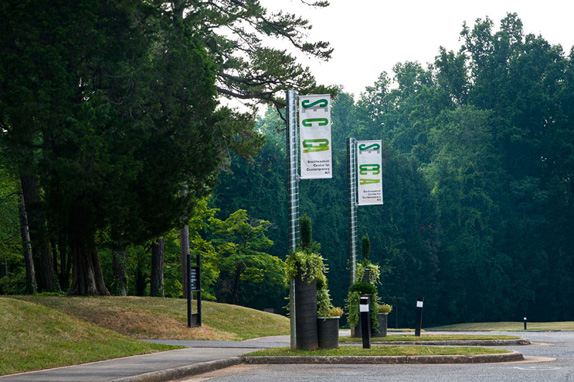 Variations in places are so subtle, blink and you’ll miss them. 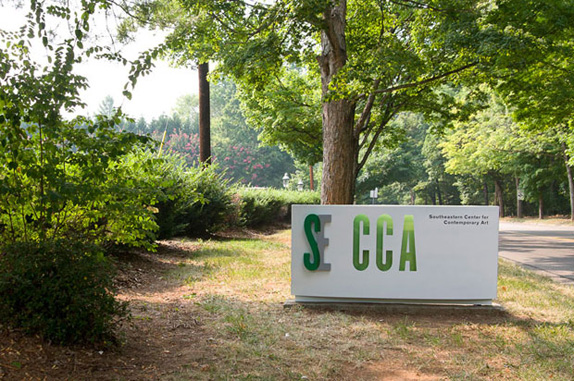 The “living” metaphor almost seems more appropriate than flux — the identity sports a lush, lively green, evocative of SECCA’s verdant forest-like surroundings. By simply sliding the letters left to right, even more life is given to the five Akzidenz Condensed (I’m guessing) letters that they couldn’t otherwise possess, if held in stasis. The letters never completely pass each other, so there’s never an issue with the name becoming unrecognizable — the closest it get’s to any sort of issue, in some instances the letter overlap to the point of almost being on top of each other — nothing too serious.

Sample of website as shown on Pentagram’s own web site. With all the design prowess at Pentagram, surely they would able to make a web screen grab without a horizontal scrollbar and cropped drop shadows?

A critical challenge with an idea such as this is translating the idea into print, without losing the sense of dynamism. From the set of stationery, signage and wayfinding available for review, an attempt has been made to retain the idea of flux, but very subtly. One wonders if a more radical variation of logos might have been examined, but rejected. That’s not to say these elements aren’t well resolved — the entire identity certainly possesses that “designed by people who know what they’re doing” feel. 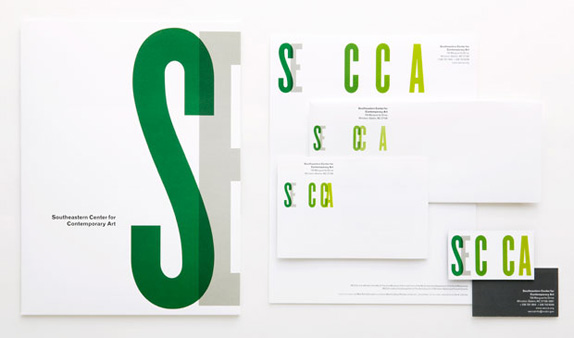 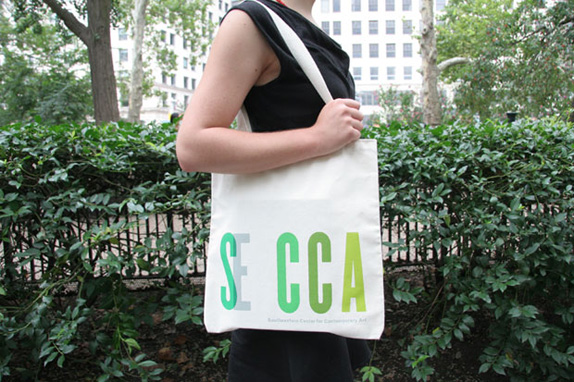 The previous logo was a rather confusingly constructed affair — with rounded terminals on the “SE” and extra bold extended helvetica for the “CCA”. There was little to distinguish it in a sea of similarly branded art institutions, and the new logo, whilst adopting the tropes and visual language so familiar in this category, cleverly distinguishes itself in an engaging, novel and interesting way. As the identity grows up, it will be interesting to see if those five moving letters stay fresh and maintain their youthful exuberance as they enter middle age.

SECCA, or the South Eastern Centre Contemporary Art, is a contemporary art centre in North Carolina. Originally founded in 1956, the organization really got going in 1976 thanks to a philanthropic bequest of industrialist James G Hines's 32-acre estate. In 2010, after an extensive renovation, they turned to Pentagram partner Luke Hayman for a new visual identity to compliment their shiny, newly updated art space.