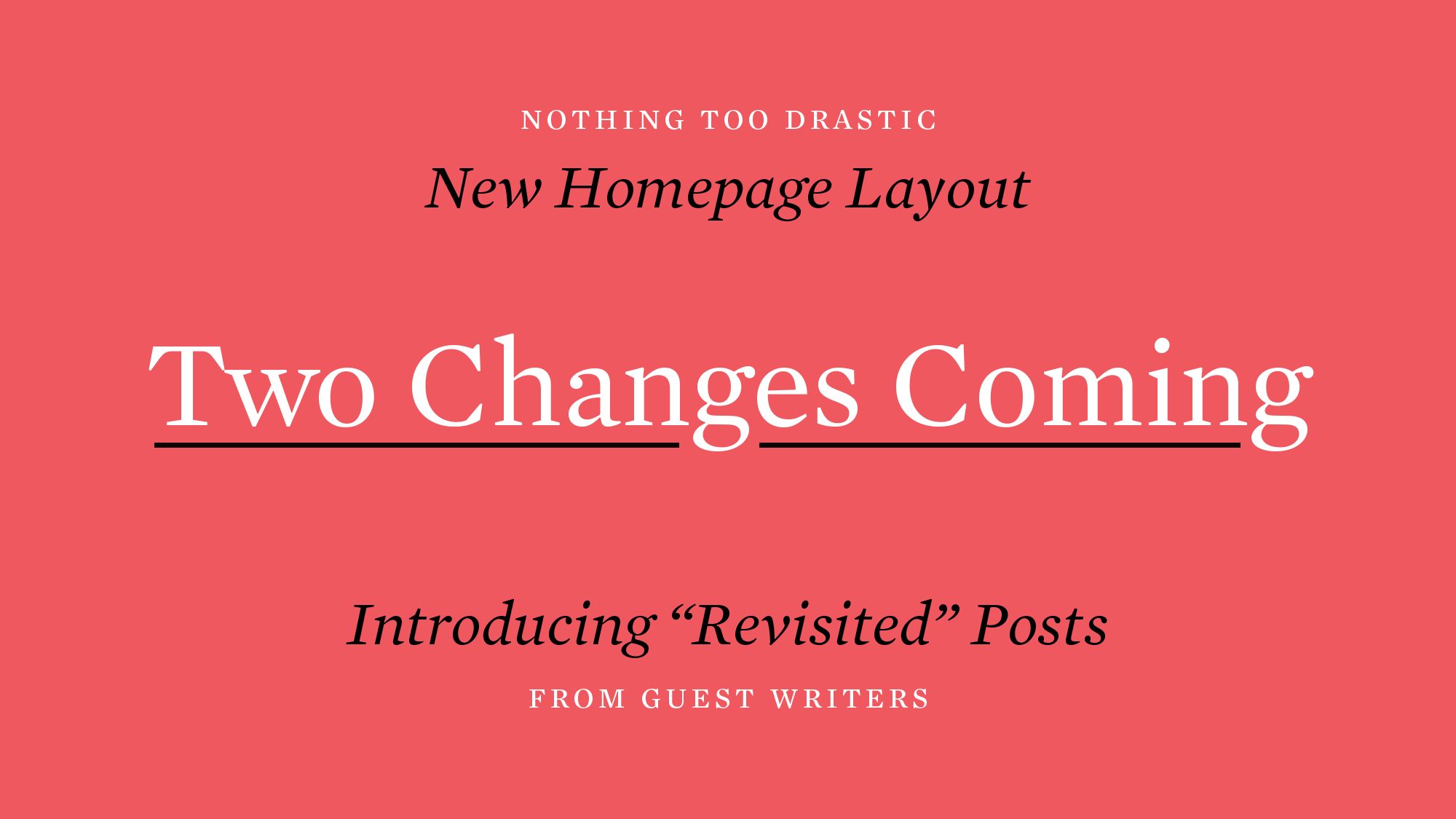 Announced Mar. 30, 2021 by Armin No Comments on Two Changes Coming

We have a couple of changes coming, most likely to be rolled out next week, and since one of them is the first change to the homepage layout in, like four years, I wanted to give you a heads up so that it didn’t come as a big surprise. The other one is the addition of a new editorial category so that one is good news all around and doesn’t require any adjustment on your part but the two things are related. So…

No April Fools this year

While I have your attention and before we get started, here is a spoiler alert that this year we will not be doing any kind of April Fools post. This is not a political or philosophical stance… simply a personal reflection that we did not have the energy, time, or interest to prepare something this year. To avoid any possible confusion, we will not be posting at all on Thursday so that there are no misinterpretations on any work posted that day and whether they are meant to be taken as a joke or not. So…

For almost ten years we have been publishing across three editorial categories: Reviewed, Noted, and Linked. About four years ago we added Spotted, which we have been running on the footer of the site. As we have moved into the subscription model and tried to think of ways to add value we felt that the three-column approach of the home page, driven by the three main editorial categories, was limiting to introducing new types of content so in order to accommodate new “streams”, we are shifting the relationship between editorial categories and calendar days:

With the new layout, we will group posts by day so that there is a better chronological view of the content that, as a bonus gives us the flexibility to drop in more posts in each day, whether it’s the new “Revisited” category or more Spotted or Noted posts (which I might do next month a few days as I have backlog of work to post that is deeper than usual). This change also allows the Spotted content to get less lost in the bottom of the site as there is plenty of decent stuff to look at that often passes unnoticed.

Speaking of Spotted… if I have the time between now and next week I will be making some small adjustments too to make those posts a little more useful.

Aside from “Revisited” and more of the other categories we do have ambitions for creating other bits of content that we can drop on different days as the content becomes available but that is still in the planning stages.

Like any change, this will take getting some used to but I do think it is for the better. I thought about keeping the current home page as an alternate home page for anyone resisting change but then I would have to figure out a way to include the new content in there and that defeats the purpose of this exercise.

For those of you who primarily access Brand New through RSS, there is no big change… things will continue streaming in order.

As its name implies, the idea of this new editorial category is to revisit brands at least one year since they were launched and see how the work has developed, how it looks in the real world, and most importantly, to reassess it once the novelty (usually shock) of the change has worn off and become the new normal.

Most of these posts will be written by guest writers from the Brand New community as a way to bring in new voices and points of view other than mine. To kickstart the category we have upcoming posts on Chobani, Facebook, Formula 1, and Dunkin by Danica Mitchell, Mark Kingsley, Tom Swinnen, and Katie Schallick respectively. The first one, Chobani, will be posted next Wednesday.

These posts are paid written contributions — US$100 — and you can use this post as an open invitation to pitch an idea of your own. We can help with sourcing images from the designers as was the case with three of these first efforts but images can also come from social media or examples of real-world usage photographed by you. Articles don’t have to be huge, academic essays either but a good 6 to 8 paragraphs are often needed. So… think about it and if there is something you would like to revisit, let me know!

That’s it for now! As I keep mentioning over and over, we have more ideas that we want to implement but the going is still slow at UnderConsideration headquarters with our kids still taking classes online at home and Bryony only available at half-speed, half-energy. Hopefully, if it’s safe to have our kids back in school for the next academic year, we will be able to move a little faster.

New Logo and Identity for Kia done In-house and Blackspace

New Logo and Identity for Pfizer by Team

New Logo and Identity for Getsafe done In-house with DesignStudio

New Logo and Identity for Nike by You by Gretel

New Logo and Identity for Austin Java by Tilted Chair

New Logo for “The Cher Show” by House Industries

New Logo and Packaging for Exo by Gander